it’s a quarter after one…

i’m all alone and I need you now

I love this song. When country meets pop. It was 2010? Yep. I was rooting for that song. It „only“ reached number 2 in USA. Wow, now i have just checked – 60 weeks in top 100. Well done. Rihanna’s Rude Boy and some other crap named Taio Cruz’s Break Your Heart prevented them from the pinnacle. Damn.

A piece of the lyrics:

it’s a quarter after one I’m all alone and I need you now.

Lady Antebellum is from Nashville. What a coincidence. I was in Nashville last October. And i liked it. Hilary Scott is her name.

Yes, this post is part of my project – a journal of coronovirus on planet Earth. I do not wanna be apocalyptic, cerebral or dystopian.

I want to make life lighter, happier, easier these days. We will survive. Well, they say most of us will. Yikes!

So i am not going straight to the point in my post. Suck Foronavirus. Hashtag spoonerism. Let us be lighthearted for a moment.

Today we have started home office – 50/50 partition. My workmate works from home, i am in the office. After 2 weeks we switch. I really thought it would be a long and boring day. But it was just the opposite – super quick and quite interesting.

I visited my two offices. Main office was invaded by me twice. In the morning and by the end of my shift. I like this place for one reason only – the view from the terrace. 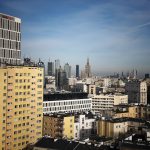 It was a quick errand, i did what i had to do there and went to my regular office. The regular office has a nice street level view – the city centre.

Yesterday i packed my backpack. A logic pictures – check! A book – check! I really thought i would have nothing to do there. I was aromoured with amusement slash entertainment. And you would never believe what happened! I had no time to even think about taking my goodies out from my bag. That busy i was.

During the day my workmate from other city called me and we chit-chatted a bit. He said he was thinking about connecting his phone to the monitor and play some HBO. But he failed too.

After my work i logged in to Polish TV VOD and i found … television theatre plays. Wow. I remember when i had a tv – every monday they played it after 8 pm on Channel 1. I hated those shows. Who watches theatre plays? It is extremely dull! – i was saying back then. But today? I was really enjoying it. I played Cena by Łysiak. The book had been awesome that was why i picked that show today. Cena in polish is price. Cena in italian is supper/dinner. And the book/play was about the discussion over the dinner about the price of a man’s life.

And that was Monday! See you on Tuesday.