I really never watched or listened to those TED talks.

First i need to think hard when Ula from Texas started to stalk me on instagram. A year ago? I mean follow. On instagram you follow or unfollow, you do not stalk people. Me and Ula met last June in Warsaw, so we started to follow each way before June 2017. It was me who was brazen enough to ask that Texan/Polish girl for a meeting. She was either shy or scared … or both. She said – i think will bring my big brother. Definitely scared.

And it turned out to be a very nice meeting! We send little gifts each other every now and then. T-shirts from Texas are the best. So i have to try hard to repay. I even went to the Holy Land to get her something. Yeah, friendship is golden and it requires sacrifice.

I lost my temper and offered him my help, as a guide. We met. I showed him some places. We went to that bridge for sunset. Well, it is the only place in Warsaw where you can see beautiful sunsets over the city centre. There are always plenty of people there.

After that „romantic“ photo session we went to grab a bite and have some beers. I wanted to take him to the restaurant in the Skaryszewski Park (at Dedek’s). I could not find it as it was dark. Long story short. We became friends. After few days of our acquaintance he confessed!

Maciej, when we went to that park, i really thought you would cut my kidney out and leave me to bleed out

I love British sense of humour.

Then, there was another guy. The Polish one. I asked him once – hi dude, how can you put panorma picture on instagram? I cannot do that. He explained me how he had done it. After few weeks i got a direct mesage from him on instagram:

He appeared to be a huge freak…i mean enthusiast of „Warsaw by night“. He had an instagram account with his friend  dedicated to our capital city.  Well, she was more than a friend or instagram partner. She was the one for him. But later he learnt he was not the only one for her. Kudos to that gal! How can you date 3 guys at the same time!? So Marcin was lonely and needed a company for fulfilling his passion. At least i had a chance to get on the top of the 5th tallest building in Warsaw. I took some really nice pics of my town. Thanks buddy!

There were a couple of more people i met in real life only after being an instagram friends.

Who else was there? Oh, two Christophers. One from Staten Island. Amazing meeting. Lots of laughing. And i like people who are dressed with a smile. I hope he is happy somewhere out there in those 2 boroughs.

The other Chris lives two blocks away from my parents! When we met his first words were:

Oh, you are tall!

So, Ted was the 6th person i met. I found him on Ula’s account. I noticed his comments. Hence started to follow him. He followed back. You know, it is social media etiquette. Like4like, follow4follow. F4F. Do not confuse it with fuck4fuck (My friend was really terrified when his daughter got „F4F“ comment on her IG account. I explained what it meant).

I really got sick and tired of comments like emoji or smiley under my pictures. At first i was super happy that somebody left a sign, noticed my work! I was like – oh, thank you. I really appreciate it!

However later i thought – oh no, you people are so fucking lazy to write a single word?I started to ignore smileys- and emojis-like comments.

At least people type anything. It is not a graphic sign of enchantment.

I noticed two very active people on Ula’s instagram account. One is a girl from Szczecin. She puts Paolo Cohelo-like thoughts. You know, like – there’s always a sun after the rain. If you want to achieve something, you have to make some effort. If you do not want to get wet in the rain, take the umbrella. I call it empty talk. Sometimes she puts lyrics of her fav songs under her pics. Well, live and let live. Her choice. Let’s respect that.

And there is a guy whose comments are deep, meaningful, well-thought. You cannot avoid them or leave them unanswered. I do not remember who started first. I believe it was him who commented my post first. For a person who does not speak perfect English it is very challenging to answer more than just „Thank you, i really appreciate it“. So, Ted’s comments challenge me. I agree with Ula that he makes instagram a better place. It is social media, so socialize people! Do not be the lifeless robots saying:

We started to talk through instagram messages. Then we switched to whatsup. I asked him if he was a reverend because his words were like a preacher’s talk! He laughed. He was not.

However i suggested that he should set his own flock up and become a reverend.The Church of Instagramers of America aka The C.I.A. There are zillion of churches in USA so why not.

Ted is a home-stayed dad. His son turns 10 tomorrow (today, 4/19). And his wife has Polish roots! Her dad came to USA when he was only 5 years old or so. Unfortunately she does not speak Polish, the most beautiful language there is.

I heard once that cielęcina is the most nice-sounding Polish word according to non-Polish speaking people.

I SPEAK POLISH. WHAT’S YOUR SUPERPOWER

My latest t-shirt gift with that motto sent to Ula. Her daughter pilfered that t-shirt right away. Naughty girl.

So i am in USA for the 13th time thinking where to go. Austin? No, i am too shy to visit Ula and meet her hubby named Krzysiu. Although it would be fun to make a test for Nicole and check if she really speaks Polish. If not, give that t-shirt back to your mother, young lady!

Austin is far, far away. Philadelphia is like 2 hours drive from my place. I asked Ted if he wanted to meet and showed me Philly around. He wanted. I vroomed, vroomed to Philly today. We met at Starbucks at 5th and South Street. On my way to that coffee shop i had to walk a mile on South Street. All my memories came back. I spent one day here back in 2007. My friend (also Ula but from the Garden State) took me there.

My first impression about Ted – Oh, you are short

I really thought he was tall. Judging by his photos on instagram. I know that camera gives you more pounds. But i did not know it gives you so many inches. Sorry Ted.

Philly has not changed a bit in my opinion! City Hall is still eminently monumental and amazing. Only LOVE statue got smaller. Hm, maybe love is overrated?

We saw lots of places. I only could not find that park on the waterfront. I need to check my 2007 pics.

I have to state something terrible. The truth about my new friend. Well, i was the guide as Ted did not know squat about Philadelphia. He was using google maps for everything. I told him that next time he would invite all of his friends and i would give them a decent tour.

I love people with a sense of humour. I hope Ted will not hate me for that post. Or for those pictures. And that is the reason i came to Philly not empty-handed. Thanks for the lunch in China Town and coffee on South Street. Do not worry Ted, only few people read my blog.

But seriously. I like people, i have a faith in humanity. I am Generation X. I survived my childhood without:

– tv – only 2 channels on Polish tv. Morning and evening sessions

I survived my childhood thanks to kids/people from my:

I am Gen X survivor! 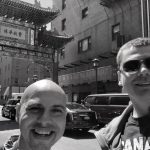 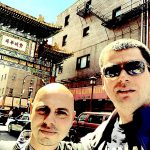 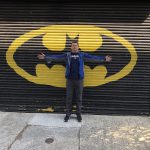 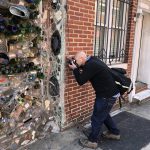