Be careful what you are whishing for, because you just might get it.

My dream was to hit a road in USA. I never knew why, but i wanted to visit Kansas City. However, it was like an impossible goal to achieve. Like a fairytale. Who knew where KC was?

In January 2018 i met Michael on Instagram. I like getting to know people and eventually meeting them in real life. 12 persons so far, thank you very much. One good thing about IG is that it generates you profiles or hashtags you might be interested in. So there was Mike’s account. Very urban, very architectural, very interesting way of showing places. We started talking. Thank to that buddy i learnt about Kansas City in Kansas and Kansas City in … Missouri. I was so surprised. At first i did not believe him. That could not be true! Impossibility. Well, Google maps and Wikipedia proved me wrong.

When i came to the States for the 14th time last October i told myself:

Maciej, what are you gonna do here for the 14th time? It is now or never. Hit the road

More than 17 hours of driving. 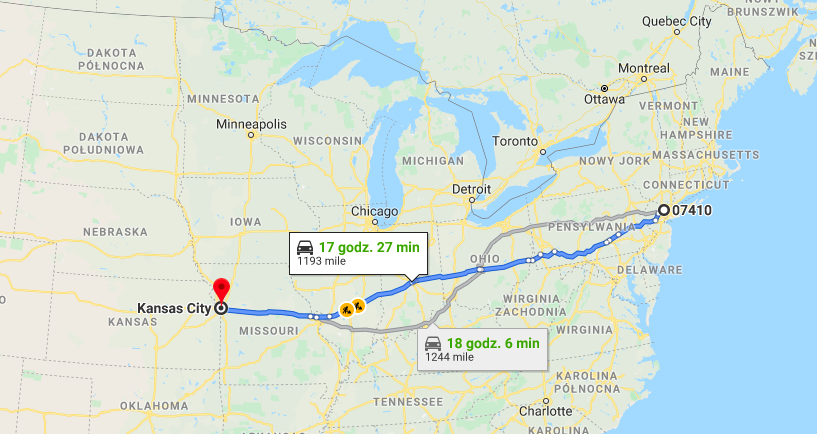 Michael said he had Wednesday and Thursday off so i had to make it on time. I drove like crazy.

I passed New Jersey … promptly. It is a small state after all. Suprisingly i drove thru Pennsylvania quite swiftly too. Ohio was nice. I did not enjoyed Indiana. Was VicePOTUS Mike Pence the governor there back in the days? I remember 2016. Election time. A day after election as a matter of fact. I was enjoying my beer at the bar in beautiful Charleston, SC. There were two couples. One retired from Massachusetts. They asked me  2 questions:

– could you tell me where Poland is?

– do you still have communism?

I explained. My next beer was on them. Very nice gesture i have to admit. They were roadtripping. It was so inspiring looking at them. They managed to drive from Boston to Virginia. 11 hours.

The second couple was from Indiana. They knew were Poland was. The lady told me about mr. Pence. Well, they were happy he might be appointed  the Vice President (in case Trump is the POTUS. We did not know that then). Hence he could leave Indiana alone and people could live happier life.

Indiana invited me with big traffic – 40 minutes delay and rain. So, if anybody asks, we are not fans of Indiana. Did i drive through Illinois? That i really do not recall.

I stayed in Saint Louis for the night. There was a … Texas bar. I could not understand people in the bar! What the hell is wrong with my english? I remember there is a girl from Kansas City, Mo in the cast of SNL. I do not understand her neither. I was terrified. How will i communicate with my friend?

But i think i was just tired. Next day was very … understanding.

The trip was nice. I was not bored or anything. It was very educational, cognitive and … relaxing. The only problem was animals trying to cross the highway. Lots of carcass on the side. If it was whole animal it was quite ok. However halves or smeared bodies was extremely … repellant. Thank God i did not meet any forest beasts.

On October 16th i checked into the Comfort Inn & Suites on Admiral Boulevard. Michael preapproved that location. I did not want to stay in some shady neighbourhood. After quick unpacking and few blocks walked i could shake my friend’s hand.

Michael’s granddad came here from Italy. My friend’s dad, he himself and his son were all born in Kansas City. I thought it would be like – hi, nice to meet you, let’s have lunch and goodbye. I did not expect more at all. It turned out that my new friend was free until 5 pm. Kansas City is well-thought designed. What hit me the most was light and space. The city is spacious. You do not feel like you are cornered by tall buildings. I loved the architecture. You can tell that the authorities take care of the city. And they try to make this place very touristy. Buildings are renewed and adapted for hotels or townhouses. Thank you Kansas City and Sprint for free streetcars. Very convenient. I had delicious cup of coffee at City Market, took a streetcar and admired the city center and Union Station. We went to Jack Stack Barbecue – Freight House for lunch. Local beer was delicious too. Everywhere i go i have to try local beer. That is my thing.

At the end of our tour Mike asked me what time i wanted to meet him next day. I was taken aback with that question. I thought i could jump into my Hyundai Sonata and move to Memphis. But having my own, private, local guide was so tempting. I agreed to meet again. But i told him that i would like to leave the city at 2 pm the latest. Michael showed me places his dad had been born and raised. That was totally different Kansas City. I told him that i had visited my first home 2 years ago. I did not have the courage to ring the bell and talk to the owners. However i had a chance to walk my old street and glimpsed at the owner’s house. I lived there from march 1976 until january 1980. Nothing had been changed. Well, almost nothing. All my memories were back! I like sentimental trips. That is why i am so thankful to my Kansas Citian friend for his time he spent with me.

Maybe it will be a fun story to reminisce in the future. But there was one … hmmm…setback. In Poland we say – fuckup. I asked Mike where to dine. He recommended one place. I thought i would go there but i was too tired and decided to go to the Anthony’s (which was few blocks down from the hotel). That italian joint was also praised by my friend. I order spaghetti with clams, mussels and other sea creatures. It was not edible. I told the bartender (i was sitting at the bar), when he asked if i wanted the food to be packed to go, that that was the worst food ever: bland and with no flavour/taste. He asked if i wanted anything else. I refused. So he shrugged and gave me the check. 27$ was there though. Did i tip them? I think no. Well, well, travels educate! They got one star from me on google maps.

I really have to think what i will show and tell if i give tours my friends in Warsaw or in my hometown Białystok. Bars and restaurants? History? What history? Just kidding. Everybody is warm welcome!

If you have time or you are nearby in mid-West, please step by. Kansas City is worth to visit. I did enjoy every minute there. I was like a kid in a toy store. Eyes and mouth in awe wide open. I was taking pictures thinking „oh, this is nice. And this is pretty too”.

This post is about Kansas City and about my friend Michael. Howevere another friend named Michael inspired me to write this. Maybe not exactly this but to write in general. Yesterday i sent him links to my posts. He said „It’s been a while since you wrote”.

Oh yes, it has been a while! Thanks Mikes!