I did not want to go back to New Jersey using the same route. Diversity is always better than sameness. Alternative itinerary was … longer (23 hours, 1 500 miles). Tennessee was tempting. 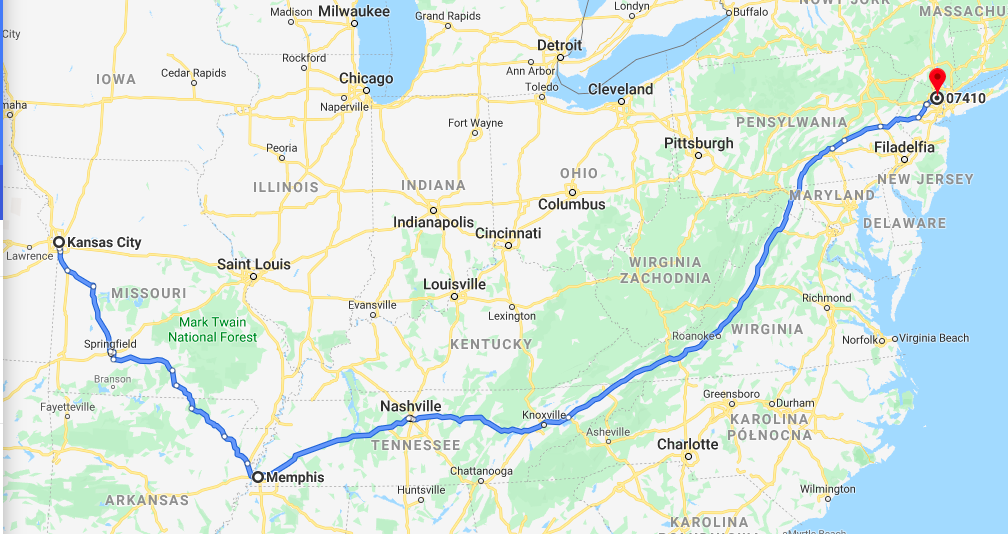 So i moved to Memphis much later than i planned. I did not book a hotel as i did not know if i would make it there the same day. Maybe i would stop somewhere at random Inn.

The plan was to see Memphis, Graceland and Nashville.

At some point i realized i would make it to Memphis before midnight. The hotel was needed then. I did not want to stop and waste time on finding on my phone a place to sleep. I called my friend and ask her for help. There was option number one – sleep in Memphis, see the city by the night, see the city by early morning and move to Graceland. Or option number two – go to Graceland, visit it in the morning and then move to Memphis.

Oh, digression. Or fact about me.

I was a big fan of Norwegian band called a-ha. In 1991 they released a compilation album which included …

Well, when i went to california last year two songs were on heavy rotation on my phone:

california here i come by sophie b hawkins

It is commonly known that i love music.

But why i did not play tennessee by arrested development on my road trip? That is an unsolved mystery…

My friend found some places. Graceland was the place i was about to stay for the night. Memphis downtown was so expensive.

I arrived after 10 pm. Prompt check-in and i could go out in search of a diner. Well. The surroundings was peculiar. Rather empty space with a gas station, subway restaurant and few detached small buildings. According to google maps in those buildings i should find at least two food joints. I decided to go to one – further on the map. It was dark, few groups of youngsters running here and there. It was not a nice stroll. I really do not know why the streets are not lit. There are street lamps and they are on but they do not give light. Weird. It is almost everywhere like that. In Fair Lawn there is a street lamp close to the front door. But you have to look down trying not to stumble. But of course when you are in your bed that goddamn lamp blinds you.

I reached my „restaurant” and turned around immediately. Jesus, what was that? On my way to that place i passed some kind of „chicken galore” place. Ok, let’s have a chicken. My low-fat diet was a vague memory already. Everything they have was breaded. But i saw shrimps!

– can i have small backet of shrimps please? – i shouted hapily

A girl wearing a net hair looked at me like i was from out of space and stated:

– honey, but those are really small shrimps. Like that

She used her thumb and pointing finger showing me how small the shrimps were.

– perfect, i am not that hungry. Can i have a salad on the side please? What do you have? A coleslaw?

I know how big food is in the States so if possible i always order small size of anything.

– honey, we are out of salads. You get fries

The „eatery” looked like a place you would not like to visit and eat voluntarily. But i was hungry and ordering food to go. The area did not look like a place visitied by many people. Even during the bright day. However they had new device for paying. I could pay using my new virtual prepaid card in my phone! Ta-dah! USA is so behind Poland as far as banking or e-paying is concerned. Prior to my trip i ordered two revolut cards. Virtiual and phisical. The latter did not make it on time. It was supposed to be delivered on the day of my flight. Polish post office is not that great. But i had both cards on my phone. Thank god i had only 100$ on them because i could not use them in majority of places. I even contacted the company complaing. They blamed those places for using old paying terminals. So when i saw that white device in that lovely restaurant i was on the cloud nine. I used my phone, grabbed my food and rushed into my room. It was yummy – shrimps, fries and … bread.

First thing in the morning i decided to visit Graceland! I was never a fan but i always appreciated Elvis. He is the King for a reason. The museum opened at 10.00 am. I did not have time for waiting. From my hotel i drove only 30 seconds and parked my car at the entrance. A nice officer explained me that Elvis’s mansion is on the other side of the street. I admired couple of King’s planes and crossed the street. You could not approach the entrance of the house but you could see the building from a very decent distance and still have a nice perspective. You could see the back of the house, pool area and enter the burial site of Elvis, his parents and grandmother. I was really thrilled. That was yet another dream come true. I could have never thought about visiting Graceland. But somehow i was there imaging how it was 40-50 years ago. I literally could feel King’s presence. The mansion is impressive. You have to realize that mr. Presley has been gone for 42 years now. So it had to be creme de la creme of the mansions back then.

Oh oh oh. They say Elvis’ mansion is the second most visited house after The White House.

Just before 9 am i moved to Memphis. The city was empty as it was still early. I entered the peabody hotel. It was really elegant and designed with class. I bought one souvenir and went by the river. Paid cash as none of my cards worked.

Mississippi river was endless. I enjoyed my eyes for few minutes and headed toward beale street. It must be the best place to relax and enjoy in the evening. Lots of clubs and posters showing the history of (blues) music. In the morning it was empty. But that was fine, at least i could take some pictures. I met 3 or 4 people there. On main street i bought coffee and something to eat. Looked at the city through the window. Emptiness again. But the street was different. Modern, green with street car rails in the middle. Pubs changed into stores, restaurants and hotels. I walked few blocks and drove to sun studio. Time stood still there. You could feel those times. Have a seat in the booth where Elvis had his coffee between sessions. That place was crowded. So Elvis is still alive in people’s minds.

Next i headed to Nashville.

It was a quick tour. I went to country music hall of fame and museum, tennessee state capitol, wandered some streets to reach broadway.

Capitol was different than capitols in d.c. or salt lake city. But still it was of course huge. I walked it around and took few pictures.

Broadway was a zoo! Crazy place. This is the heart of the city no matter the time of the day. People everywhere. On the streets, on the balconies, in the windows, inside stores and restaurants. And you have live music in every pub or restaurant. Broadway was lively and bustling. And i felt country there! Hats and boots stores. I wish i had bought something there for myself. Well. I had cowboy shoes once. Very uncomfortable. But hat? Next time.

Tennessee was fun. Was educational. I smile when i think about that volunteer state now. It was another dream come true. Dream big everybody. And…

be careful what you are wishing for …